This greeting card was reproduced from an original artwork by George Everett for THASC Sales Co. who has employed a unique group of handicapped artists who create art to help rehabilitate themselves. They gain self-respect and pride through their artwork.

With the approaching passing of summer George Everett brings us to that place where we transition into the peaceful ending of the scorching sun and into the tranquil resting place of sailboats which, with their lowered sails, helps us to relax after the hot temperatures of the days we’ve endured for the past three months. As a native New Englander, and a Pisces, being close to the water is part of my soul and I yearn to search out these little harbor villages which put my mind at ease and, at the same time, retain the beautiful memories of the warm season I love.

Life is almost forced to slow down here and leave the hectic city behind where you can either enjoy lunch on an open porch, search in the numerous little shops that are usually close by, have a refreshing beverage or just plain meditate and enjoy the beauty that surrounds us. In little Rhode Island we have many such coastal villages to enjoy. My favorite is the quaint village of Wickford in the town of North Kingstown.

Wickford is the home of painter Gilbert Stuart who was born in 1755 on the outskirts of Wickford village named Saunderstown. Stuart’s famous portrait of George Washington hangs in the Metropolitan Museum of Art in New York.

Wickford is also is the home of the Wickford Art Festival which attracts thousands every year in July to one of the biggest events of its kind on the Eastern Seaboard.

THASC artist George Everett’s “The Harbor” also draws me to another village located on scenic East Bay between Providence and Newport called Warren.

The well-known Wharf Tavern famous for it’s delicious seafood is where we are headed today. Nothing like dining on the harbor of the Bay. 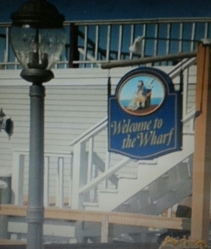 Hope you are enjoying one of the pleasantries of our American harbors as the summer brings us to a relaxing way to enjoy the dormant boats and the inviting waters. George Everett brings us there with his lovely greeting card which you can find on http://www.thasc.com

It is wonderful to be back with the THASC family after a vacation which brought me back to enjoy the harbors in little Rhody after visiting so many across our great land.

See you next Tuesday!
-Maria

Most children love going to the circus and being entertained by funny clowns of all shapes and sizes who make them laugh. The principal types of clowns are the “whiteface”, just that, ie., it uses clown white makeup to cover the face and neck, and is more sophisticated, sometimes seen wearing the ruffled collar. They are also called the “sad clown”. I have a small clown doll on my shelf which will show you what I mean:

The ‘auguste” face usually has the mouth and eyes thickly outlined in white. Usually his costume is either too big or too small and his role is being confused or foolish. To give you an idea of what an auguste clown, also known as the “happy clown” would look like, I’d like to show you my Capo di Monte clown which I purchased in Venice many years ago. It has great attention to detail. First, let’s look at the face make-up (note the mouth and eyes in white)

Clown costumes tend to also exagerate some body parts, such at the feet and noses. You will note the oversized shoes on my clown:

Some people have expressed a fear of clowns, particularly those in the circus The term “coulrophobia” is used to describe this fear as abnormal or irrational fear of clowns. Some argue that notorious figures in real life (John Wayne Gacy) have contributed to this fear. Additionally the fact that much of a clown’s behavior is anti-social can create feelings of unease. NOTE 1.

When I see a clown, I think immediately of Judy Collins classic “Send in the Clowns.” I actually have a clown music box that plays the song.
Here are some of the lyrics:

“Isn’t it bliss?
Don’t you approve?
One who keeps tearing around,
One who can’t move….
Where are the clowns?
Send in the clowns.

Don’t you love farce?
My fault, I fear. I thought you’d want what I want…
Sorry my dear!
And where are the clowns
Send in the clowns
Don’t bother, they’re here.”

Hope you all enjoyed our blog on clowns which was inspired by THASC artist Gary Lapelle. Marples looks like a “happy clown” to me. What do you think?

Join me on the last Thursday in May to salute those whom we honor on Saturday, May 30, Memorial Day.