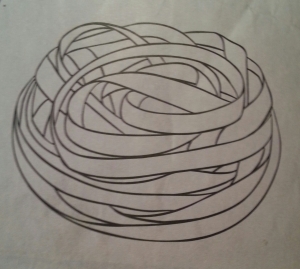 I bet most of you thought this dish was an Italian creation when in fact, as the story goes, it was created in 1914 by a chef named Alfredo di Lelio who was trying to cook something that would please his pregnant wife. This creation was a sauce made from Parmesan cheese and butter and poured over the fettuccine. In Italy it is called “Fettuccine al Burro” or fettuccine with butter. Mostly everywhere else besides the United States, it has no cream. Since American butter and Parmesan cheese lacked the richness of their Italian counterparts, cream was added to the sauce to make up for it. This version became an Italian-American classic, but it never caught on in Italy.

I use an old recipe for “besciamella” or cream sauce.
This is what you’ll need:

Remember, in Italy if you ask for Fettuccine Alfredo, they probably won’t recognize the term the way we’ve Americanized it with cream and you’re most likely to get pasta with butter and Parmesan!

Either way, it’s delicious! Make some this weekend!

See you next week!
-Maria