The years following President John F. Kennedy’s assassination in 1963, everyone seemed to ask, “Where were you when Kennedy was shot?” Decades later most people of that generation can still answer that with precisely the place and the time and what they were doing. I was crossing the Quadrangle at URI’s campus heading up a stairway to my next class after lunch, when a friend grabbed my arm and asked me if I knew. A nightmare of my baby boomer generation was about to take place.

On September 11, 2001, this generation was about to witness its own nightmare: the attacks on the World Trade Center in New York City, the Pentagon in Washington, DC and a fourth plane, which crashed in a field in Pennsylvania. The decade following 9/11 was identified by its own question. “Where were you on 9/11?” I was ironically on my way to New York City to celebrate my sister’s birthday with her and my nephew. I was to leave that day at noon. Instead the world stopped and I never went back to New York until this summer, 14 years later, to visit Ground Zero. 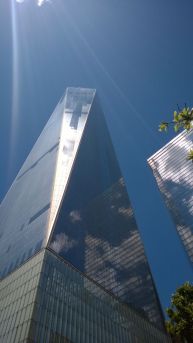 I felt mixed emotions: anger, peace, comfort and immeasurable pain, like a wound that never heals. THASC artist Donna Cushman’s acrylic painting of “LIBERTY” was painted also in that fateful year, 2001. In her powerful depiction of the strong Liberty Bell and the determined glare in the eye of our bald eagle, she clearly reminds us of the strength that prevails in all of us, despite horror and tragedy, to carry on. The skies are blue again and her red banner speaks clearly that we are forever free.

Professor Constance M. Greiff wrote of the Liberty Bell that with its crack, it is “irreparably damaged…but perhaps that is part of its mystical appeal…” She goes on to say. “Like our democracy, it is fragile and imperfect, but it has weathered threats, and it has endured.”

I will be thinking of that freedom tomorrow together with all of you. Thank you, Donna.

Have a pleasant weekend. See you on Tuesday.