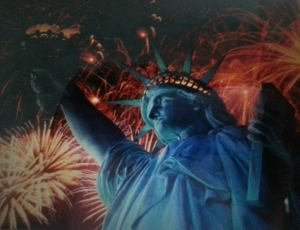 From Tuesday’s blog on “Waving Proud” until today’s blog, “Lady Liberty”, THASC artist Janice Peroni continues with her incredible watercolor impression of the powerful Statue of Liberty meeting her celebratory, colorful and explosive fireworks lighting up the New York skyline. There is nothing more exciting and decisive than the thunderous roar of these vivid bolts to verify her significance to the world. She does so with grace and distinction and nothing confirms her stance more than the skies of New York.

The French sculptor Frederic Auguste Bartholdi originally named the Statue of Liberty, “La Libertè Éclairant le Monde” or “Liberty Enlightening the World.” He modeled the sculpture after his mother, Charlotte. Broken chains lie at her feet symbolizing her as a woman free from weariness and submission. The Roman numerals for July 4, 1776, the date of American Independence, are inscribed across the tablet held in her left hand.

The Statue of Liberty was completed in France and then gifted from France to the United States as a symbol of freedom and democracy. It was a joint effort between the two countries. The Statue arrived in New York in June of 1885 in over 300 pieces from France. It was reassembled in four months and placed upon a granite pedestal which was built in America. In October of 1886, President Grover Cleveland unveiled and accepted the Statue on behalf of the people of the United States. The full statue measures 305 feet one inch from the tip of the flame to the ground. The total weight of the Statue of Liberty is 225 tons or 450,000 pounds. 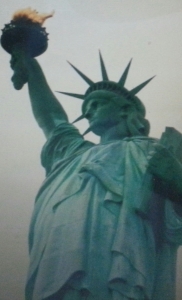 The Statue’s original torch was the first part constructed in 1886 but in 1984 was replaced by a new copper torch covered by 24 Karat gold leaf. Here are some interesting facts about the crown. Let’s take a closer look: Did you know that the seven rays of the Statue’s crown represent the seven continents and seven seas of the world?

There are 25 windows in the crown which represent the gems of heaven shining over the world. Access has not been available to the torch since 1916. You need to climb 154 steps to reach the head. To give you an idea of some of the measurements of the Statue: her index finger is 8 feet long and the width of her mouth is three feet.

In 1903, the poem, “The New Colossus” by Emma Lazarus was inscribed on a tablet and placed in the Statue’s pedestal:

“Give me your tired, your poor,
Your huddled masses yearning
to breathe free,
The wretched
refuse of your
teeming shore.

Send these,
the homeless,
tempest-tossed
to me,
I lift my lamp beside
The golden door!”

When I look at Janice Peroni’s watercolor I am reminded of the middle name my parents gave me, which was my paternal grandmother’s name. Maybe some of you have noticed that it is “Libera,” the Italian word for “free.” I feel I have a special connection with this greeting card and with Lady Liberty and will feel that more every year on July 4th. Thank you to Janice and to my immigrant grandparents who made this journey to freedom for me.

I hope you all have a special connection with Freedom as I do and enjoy your Holiday! 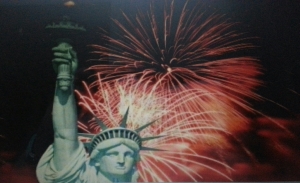