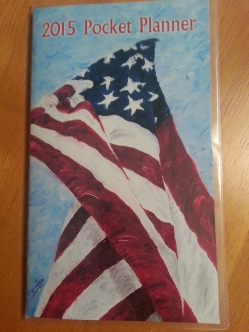 Many of THASC’s artists’ wonderful paintings are available in both greeting cards and in pocket calendars as you see above. Janice’s depiction of Old Glory is bold and beautiful
and reminds us of the most precious gift of all in America:
OUR FREEDOM!

I remember as children we learned and recited The Pledge of Allegiance every day in our classrooms…”I pledge allegiance to the FLAG of the United States of America…” It wasn’t until recently that I learned the Pledge of Allegiance dates back to President Benjamin Harrison in 1892 who was seeking ways to commemorate the 400th anniversary of the discovery of America on Columbus Day. Francis Bellamy, a Christian socialist and Baptist minister, arranged for the President and Congress to announce a national proclamation which centered on an American flag ceremony. And so the Pledge was born.

Most Americans celebrate our nation’s birthday, or Independence Day, with amazing firework celebrations, but beyond the big cities of Boston, New York, Los Angeles and D.C., there are many small towns that show their patriotic colors in a big way. For example, Bristol, Rhode Island’s Annual Fourth of July Celebration established in 1785, is the oldest continuous celebration of its kind in the United States. These celebrations starting on Flag Day, June 14 and concluding on July 4, give Bristol its nickname, “America’s most patriotic town.”

Up until about 15 years ago the family used to go to Block Island for its annual parade, as my sister Sara worked there and loved the small town intimacy. (Block Island is off the southern coast of Rhode Island and New York.) She always wore her famous blue and white sequined jacket ~ a real eye-catcher~ with a fabulous sequined flag on the back.
This is my favorite photo from July 4th :

I have since inherited that great jacket in all its glory and have worn it every year on the 4th. I just recently took it out of the closet to get ready for the big day!

The highlight of every celebration for July 4th has to be the fireworks which we’ll talk about on Janice’s other patriotic THASC greeting card called “Lady Liberty” on Thursday.

See you then as we inch closer to the Big Celebration.

Hope you’ll have a great view for fireworks wherever you will be.

“With Liberty and Justice for ALL”