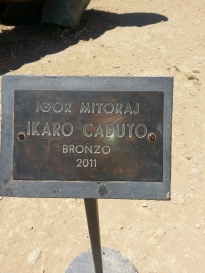 The Valley of the Temples just outside Agrigento is one of Sicily’s most famous historical attractions. In fact, the park and landscape is the largest archaeological site in the world. Most of the eight Temples (all in Doric style) except one (on the banks of the Akragas River) are really not in a Valley at all but sit on rocky crests.

I have to admit that choosing to go back to Agrigento and the Temples after having been there in the middle 60’s was a little selfish on my part while at the same time I knew it was a must see for my nephew, who later told me it was the first time he’d ever seen ruins, and my cousins from Buscemi, who drove us 3 hours to get there from their town.

The Temple of Concordia is one of the most notably well preserved temples of Greek civilization. It is the first temple you see after the bronze statue. The temples were built between 510 BC and 430 BC.

The whole time we were there I kept insisting that I had remembered the remains of two giant atlases lying in what we much later discovered was the Olympeion field on the other side of the road. No one wanted to believe me that they were there but I insisted to march on and all of a sudden we fell upon them! 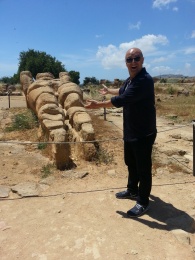 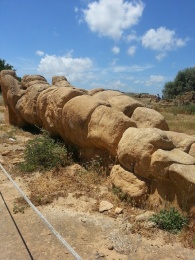 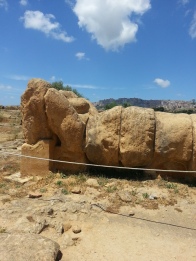 To say the least it was a breathtaking day trip and really one of the highlights of our stay in Sicily.

See you next Tuesday when we’ll return to our precious artists from Thasc. Enjoy your weekend. 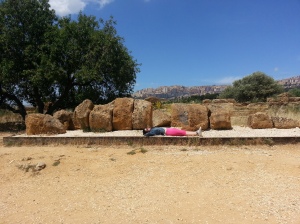 One thought on “Agrigento: The Valley of the Temples”