I had the honor today to communicate with an extraordinary individual. Terry Haffner is an artist, a motivational speaker and an author. He was also born with no arms and short legs. Terry told me that he works in acrylics and loves color. The “Three Boats” was a scene from Maine. He says mostly he paints traditional landscapes and seascapes and that people, when they travel, share pictures with him. He said that soon he would stretch himself a bit and do colorful abstract art. He paints on stretched canvas: 20” x 16” and 24” x 20” mostly. He likes doing smaller paintings mostly 8’ x 10’ and 9 x 12” using his mouth with a brush.

Terry says he has been a more professional artist since realizing people love what he does and are willing to spend money for an original HAFFNER painting. He mostly holds brushes with his right hook.

He tells a funny story about when he was about 2 years old. He was living with his grandparents and slept in an opened drawer to a dresser and one day, his mother got the bright idea to sell the dresser at a yard sale and he woke up in someone else’s house two days later!

At 13 years old, when Terry was very depressed about his parents’ health, his nephew suggested he write a book about how his parents motivated him every step of the way growing up: how they had placed a pencil between his toes when he was only three, how they loved him, cared for him and wanted him to go to school. He says this saying was always important to him: “When every challenge gets tough, every victory is sweeter. “

In his twenties Terry started traveling to Oklahoma City and then got the “bug” to share his story and to be in front of a microphone. He says he will do everything he can to lift up people.

Several years ago, after visiting San Juan and seeing a man banging a cup on the street and walking on the palms of his hands, Terry realized that banging a similar cup, especially when he talked to younger people, meant for him first, to get their attention and then, to remind them that that was not who he was.

He started to think about accepting himself the way he was. Even though he had felt that many people don’t accept you if you looked different, he finally thought it was time to give away his artificial limbs to people in poor countries. He wanted to feel whole and left the legs with no regrets.

He decided to have his new van built to accommodate him the way he was, using his hook for the steering wheel and having it built on a vacuum assist. He indeed felt whole and accepting of himself then. 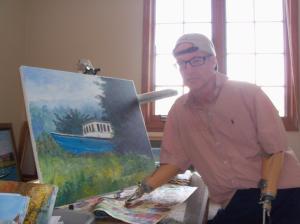 The turning point for Terry to feel recognized was when an art teacher from New Jersey saw a story in the National Enquirer about Terry called “Tales of True Courage” and sent him a box of acrylic paints and said try it. He liked it and began to use acrylic paint exclusively.

His autobiography is titled “Born With Less, Blessed With More.” It is still in manuscript form as his sister who worked on it for 13 years, passed away from Parkinson’s disease on October 3. He needs to add more to the manuscript and find a publisher. He describes his book as powerful, inspirational and funny.

Terry told me he lives in his own home, a ranch villa in Fort Wayne, Indiana. He is not fond of winter weather so he’s thinking about relocating to Charleston, NC, with greater opportunities to get galleries to look at his work.

Terry says, “All my life people have looked at me, and all they have to do is look a little farther and see I’m still the same person.”

You can see more of Terry’s work on his website:
www.terryhaffner.com

And you can also see Terry on YouTube below:

Thank you to Dana Clark, Terry’s photographer, for supplying many of the photos in this blog.

This has been an incredible assignment for me, talking to Terry Haffner. Thank you THASC Sales Co. for introducing me to one of the most extraordinary people I’ve ever met, and, of course, thank you, Terry, for your inspiration and beautiful artwork.